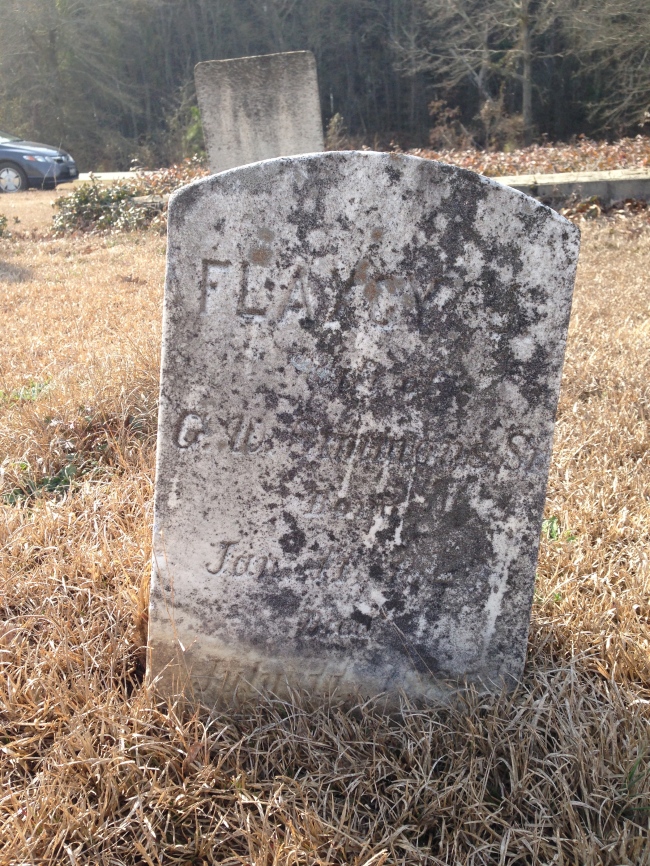 [N.B.: She is called Axey (or some alternate spelling thereof) in every census record and on sons Riley and Zachariah’s death certificates, but Flaxy (or something similiar) on her headstone and the death certs of three other sons. — LYH]

He had Negro blood in him.

White Soldier of General Cornwallis’s Army Drank Some of His Colored Sweetheart’s Blood Before Marriage in Order to be Able to Marry Her Legally.

Joseph Butler (white), a member of Cornwallis’s army, was severely wounded in the battle of Guilford, March 15, 1781.

In Cornwallis’s retreated toward Eastern North Carolina Butler became a straggler and was lost from the English army. He was succored by a free mulatto woman, who hid him in her home until the surrender of the English army the following October.

During Butler’s confinement he was faithfully nursed by the daughter of his benefactress, who was nearly white, and there grew between them a mutual affection. It was Butler’s ardent desire to marry the young woman, and he was greatly distressed upon realizing that, under the laws of North Carolina, to wed the woman was impossible – she had Negro blood in her, and Butler was a full-blooded white man.

Hid in the Home of his Sweetheart

Butler remained at the home of his sweetheart in an unfrequented part of the country, and cultivated the small farm where he lived – isolated and ignored, an alien enemy, a fugitive hiding under a Negro’s roof. He finally conceived and immediately acted upon a plan to thwart the law, which forbade him marrying the woman he loved.

In those times the “letting of blood” was regarded almost as a panacea in the treatment of all bodily ailments. The mulatto girl was, for some physical disorder, bled by a surgeon.

Her sympathizing lover was at hand during the operation, and to the astonishment of the surgeon, deliberately drank an appreciable portion of the patient’s blood.

He immediately departed and upon his return exhibited a duly authenticated license to wed his mulatto sweetheart. He had gone to the proper official, made affidavit that he had Negro blood in him, and had procured a license to marry a half-blooded Negro woman.

Rev. John J. Young, 78, Baptist minister, now living, is the son of this colored girl and the English soldier. His grandfather, Thomas Blacknall, had this interesting history:

Under apprenticeship provided by his master, Tom became a blacksmith and bell maker of more than local renown. He was permitted to keep his earnings and “buy his time.”

It is history in the Blacknall family that he was absent from home at intervals of a year without intermission, and that, with his master’s  permission, Tom went as far away as Baltimore, peddling his bells and plying his trade.

Tom Blacknall, the slave, was permitted to save his earnings and buy his freedom. The price paid for his freedom was $900. He afterwards purchased the freedom of his wife and his three sons, taking title to all of his ransomed family in himself.

He afterwards purchased three additional slaves. Had Blacknall’s wife given birth to other children, which does not seem to have occurred, such children would have been chattels of their father. Blacknall’s first wife died in de facto serfdom to her husband and he afterwards married a free Negro.

He died in 1863 and by the terms of his will his three sons passed to the ownership of their respective wives who were free Negro women. Evidently he believed in reciprocity in the marital relation. His first wife had been his de facto slave and he made his sons, who were also his slaves, the slaves of their wives.

Another astounding thing about Tom Blacknall is that he was a Negro deacon in a white Presbyterian church.

This, and the fact that he frequently led the white congregations in prayer, are established to my entire satisfaction.

I have frequently conversed with very old white people of the highest veracity and of pronounced mentality, who, as restive children, heard but did ot attentively listen to, the prolix implorations of black Tom Blacknall, fervently poured forth in the midst of white congregations in a white Presbyterian church.

He does all he can to keep me in slavery.

SENT BEFORE THE GRAND JURY. – Oswald Wright, the person charged with bringing Eveline Mills, a free negro of North Carolina, into the state contrary to law, was, yesterday brought the Mayor, and after an examination into the case was required to find security for his appearance before the Hustings’ Court Grand Jury, to answer any indictment that might be found against him for the offence. The amount of security ($150) was not given by him, and he was committed to jail. The punishment should he tried and convicted is a fine of not more than $500, and imprisonment not exceeding six months. The jury may vote the accrued guilty, fine him one cent, and put him in jail one hour. Eveline Mills, the woman who was held as an adjunct of weight in the offence, produced her certificate of freedom and discharged from custody.

SENT BACK. – Oswald Wright, who stands accused of bringing Evelyn Mills, a free negro, into this state from North Carolina, contrary to the law, was before the Mayor yesterday, but the case was not gone into, on account of the absence of witnesses. The defendant was sent back to jail. – Wright, a green country looking individual, says he came from Rockingham county, and was on his way back when arrested. The woman, Evelyn Mills was likewise sent back to answer for coming into the State without free papers. It is not known with certainty whether she is free as she asserts.

HUSTINGS COURT. – This tribunal commences its regular monthly term on to-day next. Below we give a list of cases which will occupy the attention of the magistrates during the session …. The misdemeanor cases … will be found in the following list:

7. Oswald Wright. Bringing a free negro from North Carolina to this city, contrary to the laws of Virginia.

In the 1860 census of Kinston, Lenoir County: Henderson Ganzey, 30, in the household of Bryan McCullin, livery operator.

In the 1850 census of North Side of Neuse, Wayne County: Theo. King, 22, farmhand, in the household of Major Smith, farmer.

Larkin Hagans was bound to David Bardin in 1833.

Hannah Locus and Daniel Locus, both 5, were bound to Tobias Musgrove in 1833.

The following surnames are found among free people of color in McDowell County in 1850:

Negro Stealing. – It is stated in the Edenton Gazette, (N.C.) that the noted Willis Edge, a free mulatto, of negro stealing memory, was shot on the 8th ult., in Hertford County, when in the act of arresting him for another offence of the same kind, lately committed.

An act to emancipate Betty.

An Act to emancipate Betty, a slave

Sec. 1. Be it enacted by the General Assembly of the State of North Carolina, and it is hereby enacted by the authority of the same, That Betty, a slave, the property of Joshua Carman, of Cumberland county, be, and she is hereby emancipated and set free by the consent and at the request of her master, and by the name of Betty Barbee, shall possess and exercise all the rights and privileges of other free persons of color in this State: Provided, nevertheless, that before this act of emancipation shall take effect, the owner of said slave Betty, or some person for him, shall file in the clerk’s office of the court of pleas and quarter sessions of Cumberland county, a bond with good security, in the sum of five hundred dollars, payable to the Governor of the State and his successors in office, that the said Betty shall demean herself correctly while she remains in the State and not become a county charge, which bond may be put in suit in the name of the Governor for the time being, to the use of the county or person injured by a breach of its condition: Provided, that she do not reside out of the county aforesaid, more than thirty days at any time; also that she give bond in such an amount as will be approved of by the county court, that she will not become a public charge. [Ratified the 14th day of February, 1855]