Bright mulatto boy with one thumb. 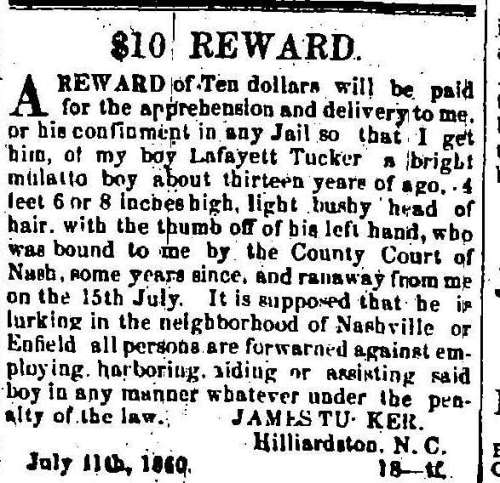 A REWARD of Ten dollars will be paid for the apprehension and delivery to me or his confinment in any Jail so that I get him, of my boy Lafayett Tucker a bright mulatto boy about thirteen years of ago, 4 feet 6 or 8 inches high, light bushy head of hair, with the thumb off of his left hand, who was bound to me by the County Court of Nash, some years since, and ranaway from me on the 15th July. It is supposed that he is lurking in the neighborhood of Nashville or Enfield all persons are forwarned against employing, harboring, aiding or assisting said boy in any manner whatever under the penalty of the law.    JAMES TUCKER.  Hilliardston, N.C.  July 11th, 1860.

RAN AWAY from the Subscriber, on the 29th of August last, an indented mulatto girl, named

In the 20th year of her age, 5 feet 4 or 5 inches high, stout built, and bright yellow complexion. The above reward, but no charges, will be paid on her apprehension and delivery to the Subscriber. All persons are hereby forbid harboring or employing said girl under penalty of the law. STEPHEN HARPER.

The free people of color would harbor him.

Ran away from the subscriber in February last, a tall negro man by the name of WILLIS, about thirty-five years of age; he is rather slim built and thin visage; has a down look, speaks slow, and would be very easily confused if strictly interrogated. No particular marks recollected, by which he could be described. It is probable he has obtained a free pass by some means or other, and may be in the employment of some person under a pretence of being free. He has some relations on the Hickory Mountain, in this county; he was very intimate in the family of Peter Chavas (a free man of colour,) who has left this country, and is now living in or near the Hawfields, Orange county, and also with the Carters‘ free persons of colour, who now live in Guilford county; he also had some connexion with the Hathcocks, who ran away from Clintham, a year or two since, and are now living in Davidson county. I have good reason to believe the Hathcocks, Carters, or Chavas would harbour him, and render any assistance in their power. The above reward will be given to any person or persons who will apprehend and confine in Jail the said fellow, so that I get him again; and all other reasonable expenses paid, if delivered to me in Chatham county, on New-Hope.  THOS. BELL, Sen.  May 23, 1827

Lurking near his father.

RANAWAY from the subscriber, in April last, his boy NICHOLAS. Said boy is yellow-complected, about six feet high, has a down look when spoken to, and is passing for a free boy; he is, no doubt, lurking in New Hanover or the lower part of Duplin county, where his father Nicholas Buffoe, a bricklayer, has a wife. — I will give the above reward of thirty dollars for his delivery to the Subscriber, or confined in any jail in the State, so that I can get him.      WM. L. MOORE, Aug. 25th, 1854

RANAWAY from the subscriber, on the 1st of July last, a free black boy by the name of FRANK MITCHELL, an indented apprentice to the Blacksmith business. Frank is about 19 or 20 years old; of small size; and of light complexion. I hereby forewarn all persons from harboring or employing said boy under the penalty of law. The above reward, but no expenses will be paid for his delivery to me in Newbern. JAMES ARMSTRONG. NEWBERN, Feb. 24th, 1848.

Ran away from the subscriber, living in Granville county, on 19th October last, a likely Negro Man, named PLEASANT, aged about 27 years, dark complected, no particular marks recollected, only on his left thumb, cut with an axe, and is strong built. I understand he is aiming for the course of Fayetteville as a wagoner, and has a wagon whip with him. He calls himself Joe, or perhaps Joe Curtin, a free negro. Any person apprehending said slave, can receive the above reward of ten dollars, if said negro is confined in any gaol in the State, or delivered to the subscriber. Letters directed to Oxford or Red Mountain Post Office, will be immediately received. ALFRED CARRINGTON Nov. 20th, 1829.

Their eyes have been injured.

RAN AWAY from the subscriber on the 8th inst, my negro man MINGO, aged about 45 years, of ordinary size, rather dark complexion, a white streak near the sight of one of his eyes, (which eye is not recollected) has rather a bad look out of his eyes. It is supposed that he is lurking about the lower edge of Edgecombe, or the upper part of Pitt, or he may have got as low down as Washington, Beaufort county, as his wife is a free woman of color, named Julia Read, lately of Pitt and has relations in Beaufort. The eyes of both him and her have been injured, his by a splinter and hers by a burn. The above reward will be given for the apprehension of Mingo, if delivered to me near Tradesville, in Edgecombe county, or if secured in any jail so that I get him again. All persons are forbid harboring, employing, or carrying off said negro under penalty of the law. MATTHEW WHITEHEAD. Nov 15, 1843

SUPERIOR COURT. – The Term closed on Saturday. The three prisoners from Bladen were refused bail, and were remanded to prison.

Andrew Jackson Evans was tried for the murder of Joseph Williams, (both free colored,) in this town on the 30th ult. The jury rendered a verdict of manslaughter, and the Court sentenced the prisoner to receive 49 lashes and pay a fine of $100. For the State, B.R. Huske, Esq. (the Solicitor being indisposed.) For the prisoner, Gen. John Winslow and Messrs. C.G. Wright and Neill McKay.

A Special Term was ordered, for the trial of Civil Causes, (which were necessarily almost entirely neglected at this Term,) to be held on the 2d Monday in February. – Fay. Observer.

NOTICE is hereby given to all persons against their employing Andrew Jackson Evans, a free boy of color, as his services belong to me, as Agent. Any one employing him after this public notice, and paying him, will subject themselves to a second payment, besides laying themselves liable for damages. G.S. DEMING, Agt. Jan’y 18.

[Clarification: As I learned when I found the top article after posting the bottom, A.J. Evans was not an apprentice at all. Rather, he had been “sold” to Deming for a period of time to pay off his fines. — LYH]

Runaway from the subscriber, on the 15th August, a free negro known here by the name of Bill Walker, an indented apprentice to the blacksmith’s trade. He is about 20 years old, and stutters badly. I will pay the above reward for him delivered to me.  D.H. DILL.  Oct. 2, 1850

RUNAWAY from the subscriber on the 24th ult. A free colored boy named Josiah Price, an indented apprentice. He is about 14 years of age, very dark apprentice mulatto, and about 5 feet 2 or 3 inches high. It is believed he is lurking in the neighborhood of Gates Court House, where he has a grandmother, and two brothers named Jim and Peter Price, who will no doubt make exertions to conceal him. I will give the above reward and pay all necessary expenses to any person, who will deliver him to me, or so confine him that I get him again.  LEM’L SKINNER.  Chowan Co. Nov. 9th 1831.