Satisfied with his guilt, the spectators immediately hung him.

FOR THE SPIRIT OF THE AGE.

On Saturday 13th inst., Mr. Joshua Ferguson, of this (Hertford) county, left his house, taking his little son along; he soon after told the little fellow to return home and he went on. Mr. F. was not heard from for some days, when his mutilated remains, partially charred, were found near the cabin of a free negro named Artis. Artis was taken into custody and his wife and father informed the captors, that Artis had murdered Mr. Ferguson, first striking him on the head with a hoe, afterwards chopped him to pieces with an axe and attempted to burn the body up. Being satisfied of the guilt of Artis, the incensed spectators immediately hung him. S.J.W.

Fatal Railroad Accident. – A free negro man, employed as a train hand on the Seaboard and Roanoke Rail Road, was killed at Garysburg today by falling from the Portsmouth cars just as the train was crossing the bridge which spans the track of the Petersburg Railroad.

A mulatto of that class called free negroes.

The committee of Divorce and Alimony to whom was refered the petition of William Smith of Heartford county have considered the Same and Report:

That it appears from the petition its self, that, the petitioner is a mulatoe of that class commonly called free Negroes. The committee are of opinion, that it is not only contrary to the true policy of this state, But unbecomeing the dignity of this house, to act on applications of this sort. The [sic] therefore recommend the adoption of the accompanying Resolution – Resolved, that the Member who Introduced the petitioner William Smith of Heartford county have leave to withdraw the same.

A grievance so oppressive.

To the Honorable the General Assembly of the State of North Carolina.

They beg leave to state that some of them whose names are assigned to this petition bore an honorable part in the seven years War which established the Liberties of their Common Country: That during that eventful period they were taught to believe that all men are by nature free & equal, and that the enjoyment of life, liberty and property aught to be secured alike to every Citizen without exception & without distinction.

With these views they need not attempt to express to your Honorable Body the deep concern with which they learned of the passage of A Law at the last Session of the Legislature by which their lives & liberties are virtually placed at the mercy of Slaves. They would ask of your Honorable Body whether their situation even before the Revolution was not preferable to one in which their dearest rights are held by so slight a tenure as the favour of Slaves and the will & caprice of their vindictive masters: for it cannot escape the notice of your Honorable Body that persons of this description are bound to a blind obedience, and know no Law, but the will of their masters:

Your petitioners will not believe that your Honorable Body will hesitate to lend a compassionate ear to their well-grounded complaints, and to redress a grievance so oppressive to them, and so wholly incongenial with the spirit of our republican government

They therefore humbly pray your Honorable Body that the Act of the last Session of the Legislature making Slaves competent witnesses against them in Criminal Cases may be repealed.

[At left edge: Petition of Coloured persons to Legislature]

Appended to this petition is a supporting petition signed by 84 white citizens of Hertford County.

He has a mulatto indenture.

One Hundred Dollars Reward.  Ranaway from the subscriber in April, 1800, a negro man named ZIBE, about 25 years of age, 5 feet 7 or 8 inches high, well made, handsome features, and dark complexion – I do suppose he is in or about Norfolk, as his mother and some of his other connexions live in that place. I have lately understood he has a mulattoe indenture and certificate, and goes by the name of the mulattoe, which is James Turtle, which if he has the indentures was executed in Bertie county North Carolina, to Mr. Jesse Brown, of county and state aforesaid, and the certificate was granted to said Turtle, by said Jesse Brown. The above reward will be given to any person apprehending said negro and confining him to that I get him again, or delivering him to me in Hertford county North Carolina, and all reasonable expences paid.  Eli Moor.

N.B. He is a tolerable shoemaker. 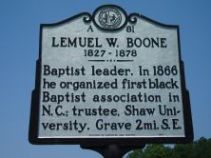 LEMUEL WASHINGTON BOONE (1827-1878) was a leader of African American Baptists in North Carolina during the Reconstruction era. In 1866, he organized on Roanoke Island the East Roanoke Association, the first black Baptist association in the state. The following year, he moderated the organizational meeting of the General Association of the Colored Baptists of North Carolina, the first statewide black Baptist association and the direct forerunner of the present-day General Baptist Convention of North Carolina. Praised by Carter Woodson as a “preacher of power,” Boone is said to have “possessed a gift of oratory and mental ability seldom excelled by men of the best opportunities.”

Boone, born free in Northampton County, worked as a brickmason and teacher preceding the Civil War. After moving to Hertford County, he organized twenty churches with over 3,000 members in the area. The inaugural meeting of the statewide Baptist organization took place in 1867 in Goldsboro and was timed to coincide with the white annual Baptist State Convention from whose members they received counsel and support.

Boone sought a reconciliation between white and black Baptists and opposed a rule requiring that white churches dismiss former slaves who ran away to join the Union army and served as one of seven original trustees of Shaw University. At his death in 1878, the minutes of his association recorded that “it is safe to say that from his ordination till his death, no person in eastern North Carolina exerted a wider and more lasting influence among his people than Elder Boone.” In 1913, a monument was erected at his grave.

Negro Stealing. – It is stated in the Edenton Gazette, (N.C.) that the noted Willis Edge, a free mulatto, of negro stealing memory, was shot on the 8th ult., in Hertford County, when in the act of arresting him for another offence of the same kind, lately committed.

We ain’t knowed so much ’bout slavery.

I reckon dat I is eighty years old, an’ I wus borned in Murfreesboro in Hertford County. My mammy wus named Annice an’ my father wus named Calvin Jones. My brothers wus named Thomas, Wesley, Charlie, Henry an’ William.

We wus borned free, my mammy bein’ de daughter of a white ‘oman, an’ my paw’s paw onct saved do life o’ his master’s chile, an’ wus freed.

My paw wus a shoemaker an’ he made a putty good livin’ fer us. Course we ain’t knowed so much ’bout slavery, but Doctor Manning who lived near us owned some slaves an’ he treated ’em bad. We could hyar ’em screamin’ at de top of dere voices onct in a while, an’ when dey got through beatin’ ’em dey wus tied down in de cellar. Dey ain’t had much ter eat nother.

Dar wus a preacher what tol’ us ’bout a member of his congregation durin’ de war. De wife wus sold from de husban’ an’ he married ag’in. Atter de war his fust wife comed back an’ atter his secon’ wife died he married de fust one ober ag’in.

From Slave Narratives: A Folk History of Slavery in the United States from Interviews with Former Slaves (1841).

He wished to go after his wife.

RAN AWAY, From Raleigh on the 25th Instant, A BLACK MAN, by the name of ABRAM about five feet two inches high, well set, and about 40 years of age, a tolerably good Shoemaker and Cooper – at the Shoemaking he has worked the year past with Mr. Joseph G. Bacon of this place. I expect he will make to Murfreesborough in Hertford County, in this State, where he is well known, as he was bro’t to this place by a Mr. Allen Clark, and sold to me in June, 1813. I expect he has a Pass, as I understand he was wishing to get one wrote, as he said he wished to go after his wife Nancy, a free mulatto, who is said to be in the neighbourhood of the Borough with one of her children. – I forewarn all persons from harbouring or employing him in any way, or from carrying him either by land or water, as I shall be under the disagreeable necessity of putting the law in force against all such persons – but will satisfy any reasonable person who may bring him to me, or deliver him in Jail, so that I get him again.  J. SCOTT Raleigh, March 28.