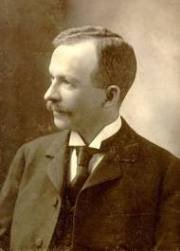 Charles Waddell Chesnutt was an author, essayist, political activist and lawyer, best known for his novels and short stories exploring complex issues of racial and social identity in the post-Civil War South. Chesnutt was born June 20, 1858, in Cleveland, Ohio, to A. Jackson Chesnutt and Ann Maria Sampson Chesnutt, free people of color from Fayetteville, North Carolina. His paternal grandfather was known to be a white slaveholder. Chesnutt said he was seven-eighths white, but identified as a colored man.

In 1867, the Chesnutts returned to Fayetteville. By age 13, Charles was a pupil-teacher at the Howard School, one of many founded for black students by the Freedmen’s Bureau during the Reconstruction era. He eventually was promoted to assistant principal of the normal school in Fayetteville (later Fayetteville State University), one of a number of historically black colleges established for the training of black teachers. In 1878, Chesnutt married Susan Perry. The couple moved briefly to New York City, then Cleveland, Ohio. Chesnutt passed the Ohio bar exam in 1887 and established a lucrative legal stenography business.  Chesnutt also began writing stories, and in August 1887 Atlantic Monthly published his first short story, “The Goophered Grapevine.” Chesnutt’s The Conjure Woman, a collection of short stories, appeared in 1899.  Chesnutt’s works grappled with complex issues of racial identity and social place, and he began to write novels that reflected his stronger sense of activism. His Marrow of Tradition was a political-historical novel based on the Wilmington Massacre of 1898, in which white Democratic insurrectionists overthrew city government, burned a black newspaper office, and randomly killed black citizens. Because his novels posed a more direct challenge to existing sociopolitical conditions, they were not as popular as his short stories, and poor sales doomed his hopes of a self-supporting literary career.

In the new century, Chesnutt increasingly turned his energies social and political activism. He served on the General Committee of the newly founded National Association for the Advancement of Colored People and became one of the early 20th century’s most prominent activists and commentators. Chesnutt died on November 15, 1932, at the age of 74. He was interred in Cleveland’s Lake View Cemetery.

Andrew Jackson Chestnut died 26 December 1920 in Fayetteville, Cumberland County. His death certificate described him as a married, colored male; aged 87; and a farmer. He was born in North Carolina to Waddell Cade and Annie Chestnut.  He was buried in Brookside Annex. Miss Annie Chestnut of Fayetteville was the informant.