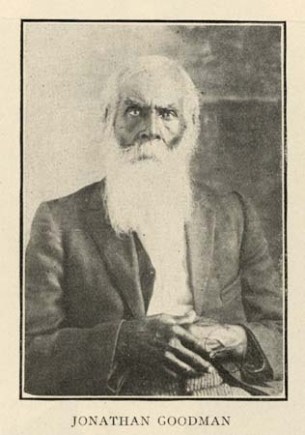 The subject of this sketch is now 76 years old and resides in Honeycutts Township, Sampson County. His wife, now dead, was Dorcas Maynor. Their children and grandchildren attend the Indian school in Herrings Township. Jonathan Goodman’s father was Timothy Goodman and his mother was Nancy Maynor. The records in the Register of Deeds’ office of Sampson County show that Timothy Goodman was a large land owner before the Civil War, and after his death his widow, Nancy Goodman, was assigned dower in this land in Sampson County, according to these records. She was a typical Croatan Indian and showed no traces of negro blood. Jonathan’s grandmother was Nancy Revell, and the Revell family are now prominent Croatans in Robeson County.

SKETCH OF THE GOODMAN FAMILY

Timothy Goodman is the founder of this particular family in Sampson County. He is said to have represented in features and general appearance the Indian race, he having straight black hair, and his complexion being of reddish hue. His mother was one Sallie Hobbs. His father unknown. He married Nancy Maynor, a woman who was an excellent specimen of the Cherokee Indian race. Jonathan Goodman is the son of the above Timothy Goodman, and we are sure, judging from his general appearance, that he is at least three-fourths Indian, with only one-fourth white. His first wife was one Dorcas Maynor, Indian, daughter of Morris Maynor. Many sons and daughters were born to this couple, after which the first wife died, and he married his present wife, Lucy Faircloth, who was the daughter of a white woman by the name of Mary Faircloth. Her father being unknown to the writer. Mary E. Brewington is the daughter of Lucy Goodman, her father being an Indian. Mary E. Brewington married James Brewington, a son of Raford Brewington. They also have several sons and daughters.

From George E. Butler, “The Croatan Indians of Sampson County, North Carolina. Their Origin and Racial Status. A Plea for Separate Schools,” (1916).

2 Comments to “Timothy Goodman and family.”