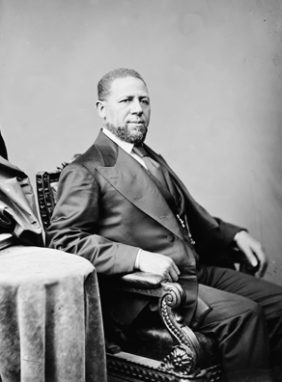 Hiram Rhodes Revels was the first person of color to serve in the United States Congress.

Revels was born free in 1827 in Fayetteville, North Carolina. In 1838 he moved to Lincolnton, North Carolina to apprentice in his brother Elias B. Revels’ barber shop. After attending seminary in Indiana and Ohio, Revels was ordained as a minister in the African Methodist Episcopal Church in 1845 and served as a preacher and religious teacher throughout the Midwest.

Revels served as a chaplain in the United States Army during the Civil War and helped recruit and organize black Union regiments in Maryland and Missouri. He took part at the battle of Vicksburg in Mississippi. In 1865, Revels left the AME Church and joined the Methodist Episcopal Church. In 1866, he was given a permanent pastorship in Natchez, Mississippi, where he settled with his wife and five daughters, became an elder in the Mississippi District, continued his ministerial work, and founded schools for black children.

When Revels arrived in Washington, Southern Democrats opposed seating him in the Senate, basing their arguments on the Dred Scott decision, which ruled that people of African ancestry were not and could not be citizens. Because no black man was a citizen before the 14th Amendment was ratified in 1868, they argued, Revels could not satisfy the requirement for nine years’ prior citizenship.

Revels’ supporters of Revels made a number of arguments, including: (1)  that Revels was of mixed black and white ancestry (an “octoroon”) and the Dred Scott decision applied only to blacks who were of purely African ancestry; (2) that Revels had been  considered a citizen (and indeed had voted in Ohio) before Dred Scott; and (3) that the Civil War and the Reconstruction Amendments had voided Dred Scott. On February 25, 1870, Revels, on a strict party-line vote of 48 to 8, became the first black man to be seated in the United States Senate.

Revels resigned two months before his term expired to accept appointment as the first president of Alcorn Agricultural and Mechanical College (now Alcorn State University). In 1873, Revels took a leave of absence from Alcorn to serve as Mississippi’s secretary of state ad interim.  He died on January 16, 1901.