Tax them and send them to Liberia. 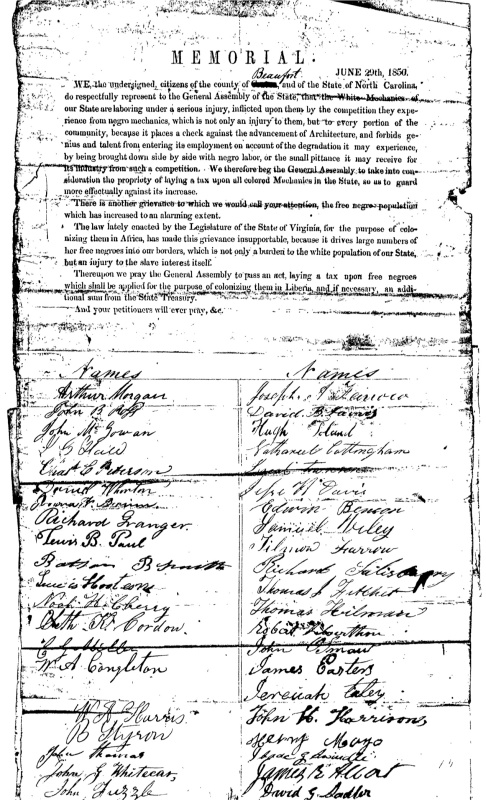 We, the undersigned citizens of the county of Beaufort, and of the State of North Carolina, do respectfully represent to the General Assembly of the State, that the White Mechanics of our State are laboring under a serious injury, inflicted upon them by the competition they experience from negro mechanics, which is not only an injury to them, but to every portion of the community, because it places a check against the advancement of Architecture, and forbids genius and talent from entering its employment on account of the degradation it may experience, by being brought down side by side with negro labor, or the small pittance it may receive for its industry from such a competition.  We therefore beg the General Assembly to take into consideration the propriety of laying a tax upon all colored Mechanics in the State, so as to guard more effectually against its increase.

There is another grievance to which we would call your attention, the free negro population which has increased to an alarming extent.

The law lately enacted by the Legislature of the State of Virginia, for the purpose of colonizing them in Africa, has made this grievance insupportable, because it drives large numbers of her free negroes into our borders, which is not only a burden on the white population of our State, but an injury to the slave interest itself.

Therefore we pray the General Assembly to pass an act, laying a tax upon free negroes which shall be applied for the purpose of colonizing them in Liberia, and if necessary, an additional sum from the State Treasury.

And your petitioners will ever pray, &c.