He may be aiming to go to his father.

RAN away from the Subscriber, in February last, a slave named HAMLET, belonging to the estate of ISAAC W. GRICE, dec’d. on the 11th inst. one of my own, named WILLIAM.

Hamlet is about five feet three inches high, a dark mulatto, about 35 years of age, and is supposed to be in Duplin County, on Goshen, lurking about the plantation of John C. Wilson, where he has a wife. William is a bright mulato, about five feet, five or six inches high, wide cheek bones, narrow chin, smiling countenance when spoken to, about 27 years of age, and may be aiming to go to his father, Jim Philips, a free man of color, & a shoemaker, who was in Lumberton the last I heard of him. I will pay the above reward for the delivery of said slaves to me, or lodged in any Jail so I can get them again, or TEN DOLLARS for either of them. PATRICK MURPHY, for self, and as Adm’r. of I.W. Grice. Near Taylor’s Bridge, Sampson County, N.C., August 22d, 1839.

Cohabiting as man and wife.

This day personally appeared Peter Mull, a free man, and Eve Crawford, late a slave of Christine Brown, who acknowledge that they have been cohabiting as man and wife since sometime in the year 1844, and wish to continue as such. Obadiah Woodson, Clerk.

This day personally appeared Richard Cress (a free man of color) and Dathna Ann Latham, late a slave of Frederick Latham, who acknowledge that they have been cohabiting as man and wife since sometime in July, A.D. 1863, and wish to continue as such.   Obadiah Woodson, Clerk.

In March 1866, the North Carolina General Assembly passed an Act to ratify the marriages of former enslaved persons.  Justices of the Peace were to collect and record in the County Clerk’s office so-called cohabitation records. Under penalty of misdemeanor charge, freedmen were required to register before September 1, 1866. 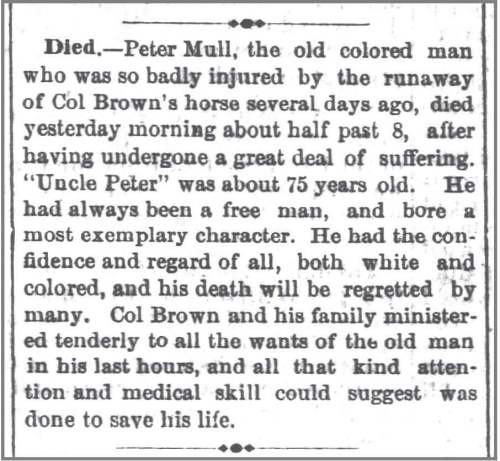 This was an indictment In Perquimans County against Trim Hopkins, a free negro, for furnishing liquor to a slave. The indictment contained two counts; one for selling spiritous liquor to a slave; and the other for giving it to him.  Hopkins was with Jack, a slave belonging to a Mr. Skinner, at a house where liquor was sold.  Jack gave Hopkins some money to buy a quart of liquor, which Hopkins bought and immediately gave to Jack. Hopkins was convicted.

On appeal, the Supreme Court emphasized the two counts: one for selling spiritous liquor to a slave, the other for giving the liquor to the slave. “The Revised Code contains two chapters on this subject: the 34th and the 107th. The 87th section of the first provides — ‘No person shall sell or deliver to any slave, for cash, or in exchange for articles delivered, or upon any consideration whatever, or as a gift, any spiritous liquor,’ &c. The 67th section of the latter chapter is as follows: ‘If any free negro shall, directly or indirectly, sell, or give to any person, bond or free, any spiritous liquor, he shall be guilty of a misdemeanor.’ … The question presented to us is, do the facts stated in evidence bring the defendant within either clause of the recited chapters? We think they do not.”

Where a slave handed money to a free negro in a liquor shop, who handed it to the liquor dealer, received liquor in return, and then handed it to the slave, he was not guilty of either selling or giving the slave liquor. Judgment reversed.

The court also overturned the decision in State v. Jim Wright, 49 NC 308 (1857), on substantially the same grounds. There, Jim Wright, also a free man of color, was charged with selling and delivering a quart of spirits to Sam, a slave owned by a Mrs. Barron.